Now that we’ve kept you in suspense long enough, let’s have a look at the first results of our project! As you know, we asked our fantastic citizen scientists to rate emojis according to how intense and how positive they are. This helps us understand how emojis are used more generally, and whether there are any that are similar in their usage. As you can probably imagine, emojis that are similar in how intense and how positive they are might make for good candidates that people can switch between and adapt to one another!

So, let’s take a minute to think and see if we can predict the results. Our two points are intensity and positivity. What emojis come to mind when we think about emojis that are particularly intense? And what about which emojis are the most positive? Or the most negative? In terms of intensity, we might think about emojis that express emotions that are the most intense, so things like excitement, joy, sadness, or anger. So maybe emojis like 😭 or 😂 or 😍 or 😡? But what kind of emoji would be particularly calm? Maybe emojis that don’t have very much to do with emotions, like objects, or alternatively calm emotions. So maybe emojis like ✨ or 👍? But after that, how about positivity? We could expect emojis with traditionally positive emotions to be used more positively, and those linked to more negative emotions to be used more negatively, but sometimes irony comes into play. In addition, with calm emojis, maybe context might have a bigger impact. And additionally, if we’re looking at only the beginnings of conversations, to what extent can we expect to have calm and negative emojis?

Based on the ratings of our citizen scientists, we have been able to create a graph of the different emojis used in the chats, according to how positive (left to right, 1 being negative, 5 being positive), and how intense (top to bottom, 5 being intense, 1 being calm) they were rated. Let’s have a look! 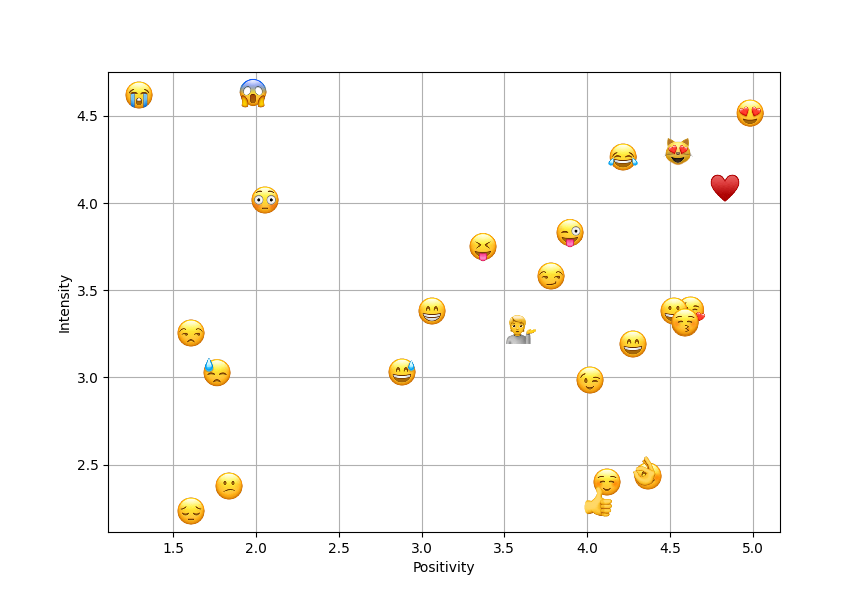 The first thing to note is that the graph does not go from 0 to 5 in both directions, which means that there were no emojis that were on average rated lower than a 2 for intensity. In other words, no emojis were consistently rated as “calm”. They were all rated at least “slightly calm” on average. There are also no emojis that were on average rated as “intense”, they all always had at least some lower intensity. However, for positivity, there was one that was rated on average as positive, and one that was almost rated negative. Unsurprisingly, the emojis that are the highest in terms of intensity are those related to more intense emotions as we previously discussed: 😭 and 😱 and 😍. It’s interesting to see that there are no angry emojis that were used at the beginnings of the conversations that we selected, so they were not among the emojis rated. What is also really interesting to see is that there are many more positive emojis than there are negative ones. There are two that lie on the limit between positivity and negativity at almost a 3 average, while for intensity and calm there are 3. And, in fact, 😅 seems to be the ultimate neutral or ambiguous emoji, being closest to the middle for both scales.

Now let’s look at the results in a bit more detail. There seem to be certain kinds of emojis that stay close together. The first most obvious one is the heart-related ones, that are all positive and intense. The kissing face emoji with a heart is rated a little lower in terms of intensity, but it is approximately at the same level of positivity, itself clustering with the kissing face emoji without a heart. This is interesting, as the kissing aspect of the emoji seems to be more important than the heart. Another interesting group is the low intensity but relatively high positivity of the hand gestures, specifically the ok symbol and the thumbs up. They are also really close with two standard smiling faces, which is an interesting overlap. This could also suggest an overlap in use, since they seem to be similar. Unless, if we look at the function of these emojis, we see that the gestures are used more frequently to replace a word or a phrase, or to clarify the meaning of the sentence, while the faces are used almost exclusively to express an emotion.

Emojis that stick out their tongue seem to generally be slightly positive and slightly intense, and the two emojis with open rounded mouths are both intense and negative. Another interesting group to look at are all the emojis of faces that are smiling with an open mouth. They are all at a similar degree of intensity (between 3 and 3.5), but they are more spread out in terms of positivity: the one showing the most teeth is the least positive, and the one with open eyes is the most positive. It would not be unthinkable that these might be related to the context in which they are used, or even the person messaging. In general, since our data is limited to the behavior of certain whatsappers, it is always possible that these results are influenced by this, or even by the language of the conversation, and that there might be different practices across languages.